Diversity, Equity, and Inclusion at DACC

Diversity, Equity, and Inclusion at DACC

The Liberal Arts Division, in partnership with the Office of Diversity, is hosting a virtual film festival to celebrate cultural diversity on DACC’s campus. We decided to organize this festival to create opportunities for developing a deeper understanding of history, politics, culture, the arts, and more. Each film has clear connections between disciplines within the Liberal Arts and across campus and in our community.

This year, we are highlighting films that are available through popular streaming services, such as Netflix and Amazon Prime, as well as a selection of films that can be accessed by DACC students and faculty (for FREE!) through our Library’s homepage and other sites. These streaming videos were selected to support in-class and online conversations about diversity and inclusion.

Click HERE to complete a survey, and be entered to win prizes. If you are participating in the Festival for a course, please include your instructor's name and the name of the course, so you can earn credit for the assignment. 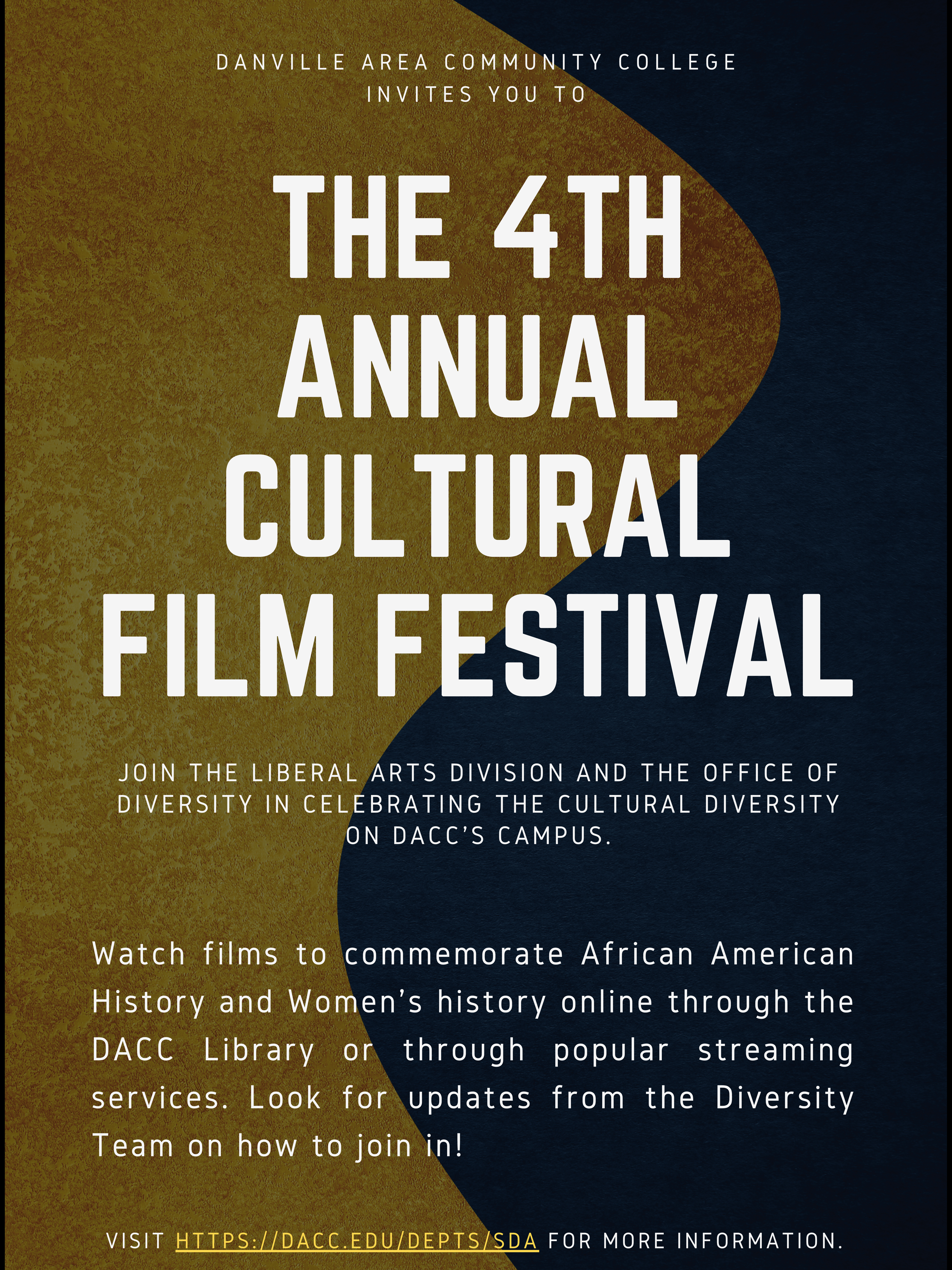 STREAMING ACCESS THROUGH THE LIBRARY
Race: The Power of An Illusion - Available through the DACC Library
This powerful, award-winning three-part series traces the development of race as a social construct, and presents a clear history of race, including both cultural and scientific perspectives.

(Episode 1) The Difference Between Us - Available through the DACC Library
https://go.openathens.net/redirector/dacc.edu?url=https%3A%2F%2Fvideo.alexanderstreet.com%2Fwatch%2Fthe-difference-between-us
Episode 1 explores the myths about race, focusing specifically stereotypes about athletic and intellectual abilities and exploring race from a biological perspective. For more information on this episode, click here.

(Episode 2) The Story We Tell - Available through the DACC Library
https://go.openathens.net/redirector/dacc.edu?url=https%3A%2F%2Fvideo.alexanderstreet.com%2Fwatch%2Fthe-story-we-tell
Episode 2 traces the development of racial hierarchies and oppressive economic and social systems. For more information on this episode, click here.

(Episode 3) The House We Live In - Available through the DACC Library
https://go.openathens.net/redirector/dacc.edu?url=https%3A%2F%2Fvideo.alexanderstreet.com%2Fwatch%2Fthe-house-we-live-in
Episode 3 focuses on racial privilege and racial oppressions and explores how certain groups became “white” over time, focusing specifically on public policy and customs. For more information on this episode, click here.

Slavery by Another Name
https://dacc.kanopy.com/video/slavery-another-name - Enter your User ID and Password and Search for the Film.
This PBS documentary works to dispel the myth that slavery ended after the Civil War and explores the history of convict leasing and the peonage system in the United States at the turn of the 20th century.

The Black Panthers: The Vanguard of the Revolution
https://dacc.kanopy.com/video/black-panthers-0 - Enter your User ID and Password and Search for the Film.
This documentary chronicles the rise of one of the most misunderstood political parties: The Black Panther Party for Self-Defense.

Reconstruction - Streaming for FREE on PBS
https://www.pbs.org/weta/reconstruction/
This four-part PBS documentary series chronicles the events of post-Civil War Reconstruction (1865-1877) and the many advances made by African Americans during what W.E.B. Du Bois describes as a “brief moment in the sun.”

Let It Fall: Los Angeles 1982-1992 - Streaming on Netflix
This documentary chronicles the decade leading up to the Rodney King beating.

LA92 - Streaming for FREE on YouTube
https://youtu.be/uaotkHlHJwo
LA92 begins with the aftermath of the Rodney King trial, where four white police officers were acquitted.

13th - Streaming on Netflix
This well-researched documentary provides a clear picture of the modern criminal justice system, focusing specifically on the intersection of race and mass incarceration.

Hidden Figures - Available through the DACC Library
https://go.openathens.net/redirector/dacc.edu?url=https%3a%2f%2fffusa.infobase.com%2fPortalPlaylists.aspx%3fwID%3d100739%26ff%3d1%26%26customID%3d3540
This film tells the story of three African American women who made significant contributions to the success of NASA’s space program.

Toni Morrison: The Pieces I am - Available through the DA
https://digitalcampus-swankmp-net.eu1.proxy.openathens.net/dacc372012/watch/56EDB4B4BA290EEF?referrer=direct
This documentary explores the life and work of one of America’s greatest literary figures: Toni Morrison.

Lorraine Hansberry: Sighted Eyes/Feeling Heart - Available through the DACC Library
https://dacc.kanopy.com/video/lorraine-hansberry-sighted-eyesfeeling-heart
While most Americans have read Hansberry’s work, “A Raisin in the Sun,” few are familiar with her political contributions. This award-winning documentary is the first to chronicle the life of playwright Lorraine Hansberry.

He Named Me Malala - Available from the DACC Library
https://go.openathens.net/redirector/dacc.edu?url=https%3a%2f%2fffusa.infobase.com%2fPortalPlaylists.aspx%3fwID%3d100739%26ff%3d1%26%26customID%3d3835
This documentary tells the story of a young girl, Malala Yousafzai, who survived a Taliban attack and went on to champion education rights.

Free Angela Davis and All Political Prisoners - Available from the DACC Library
https://digitalcampus-swankmp-net.eu1.proxy.openathens.net/dacc372012/watch/E53CF231C1992053?referrer=direct
This documentary tells the story of Angela Davis, a college professor and political activist, and her involvement in the Civil Rights Movement.

Ladies First (Netflix)
This documentary tells the story of a young Indian girl, Deepika Kumari, and her triumphant rise from poverty to international champion.

"What Happened, Miss Simone?" (Netflix)
This powerful documentary has been featured before during our Cultural Film Festival and is now available on Netflix. Nina Simone was a singer, songwriter, and political activist. This film tells the story of her life, her music, and her involvement with the Civil Rights Movement.

Mission Blue (Netflix)
This award-winning documentary tells the story of marine biologist and environmentalist Dr. Sylvia Earle and her quest to save our oceans.