We’ve come to the end of another weird and difficult semester, but our students have persevered and prevailed. For some students this week’s final exams will be the end of their journey with us. We wish our December graduates the best and look forward to welcoming returning students in January.

Recently, we were blessed to be able to share the achievements of one former student with the entire state. Dr. Gerald Cockrell, who graduated in 1973 when we were still called Danville Junior College, was recognized as the 2020 Distinguished Alumnus Award winner by the Illinois Community College Trustees Association. Dr. Cockrell was one of the first students to graduate from our electronics career program – designed as a terminal degree – and then transfer to Indiana State University to earn a bachelor’s capstone degree in electrical engineering technology. Eventually, his desire to be a teacher led him to complete both a Master’s degree in Industrial Engineering at ISU and then a Doctorate in Engineering Education at Indiana University. He retired from Indiana State University in 2012 as a full professor of Electronics and Computer Engineering Technology. He has served as President of the DACC Alumni Association Board since 2017.

It was particularly apropos that Dr. Cockrell was recognized as the personification of community college graduates in this year – the epitome of distance education. Even his award ceremony -- conducted not at a large banquet in Chicago surrounded by statewide trustees and community college leaders, but at a local board meeting with only two ICCTA representatives and everyone in the room wearing face masks – was the embodiment of social distancing. Ironically, his career prepared him for just such recognition.

During his distinguished teaching career, Dr. Cockrell was recognized as an international leader in the development and delivery of distanced (Internet-based) process control and automation programs and courses. He is a pioneer in the design and development of distance delivery of real-time laboratory experience. He authored two books on Project Management and won an award from the International Society of Automation. He was recognized with an Honorary Doctorate from the St. Petersburg State University of Aerospace Instrumentation in St. Petersburg, Russia, for establishing a distance project management course and coordinating an exchange program between SUAI and ISU.

Dr. Cockrell represents the resilience, persistence, and benevolence that are the hallmarks of community college students. He tried college once and it didn’t work. He served in the military during armed conflict and brought back life lessons that helped him make college work the second time around. When he found himself undecided on his career, he modified his expectations and created his own path to success, blazing a trail for others to follow behind him. Finally, he and his wife have reached a hand back to help others climb the ladder to success by endowing a scholarship for students who have overcome obstacles and wish to make a difference in the community.

While we delight in Dr. Cockrell’s award recognition, we know that he’s not a novelty among his community college graduate peers – he’s the mirror that caught the reflection of all our students. In this year that has been so challenging, they have risen to the test and excelled beyond all reasonable expectations. We’re so swelled up with pride for our students that we’re busting our buttons. Well done, all! 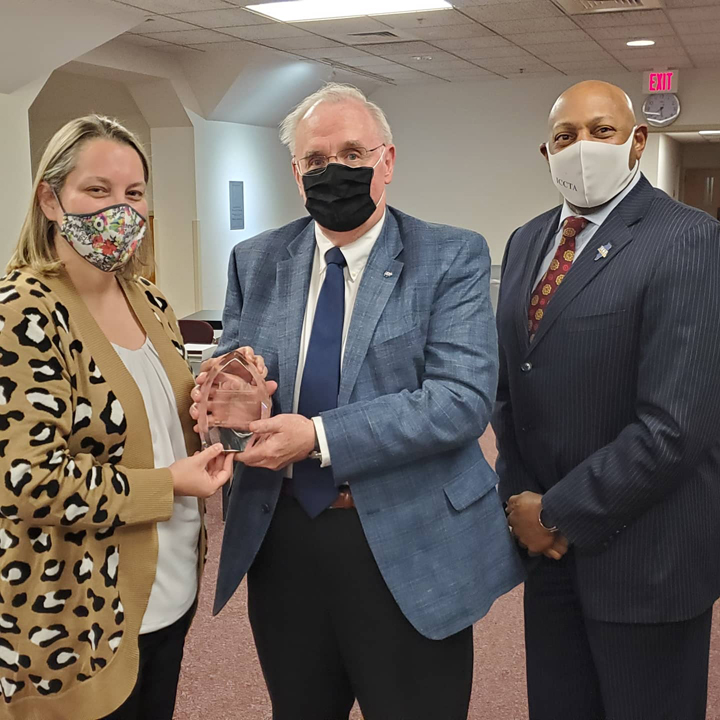